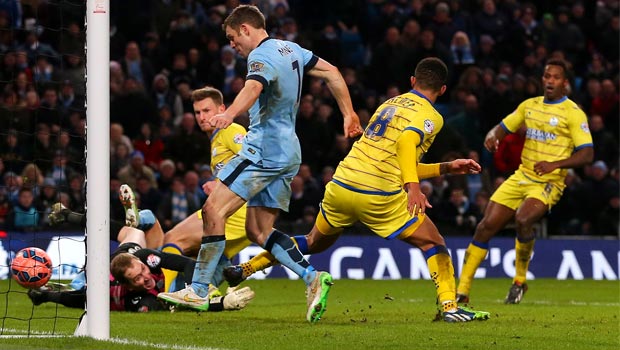 Manchester City midfielder James Milner is hoping his side can “open up a little gap” as they continue their Premier League title battle with Chelsea.

The Citizens trailed the Blues by eight points in November as an inconsistent run on both the domestic and European stage threatened to cause havoc to their season early on.

Manager Manuel Pellegrini was also coming under huge scrutiny as many predicted the Chilean would be axed at the Etihad Stadium.

The doubts have been swept aside by a run of 13 games unbeaten in all competitions and the defending Premier League champions now sit level on points with Chelsea at the top of the table.

The recent run is even more impressive as star striker Sergio Aguero and fellow forward Edin Dzeko have both been on the sidelines over the past couple weeks, leaving City with no recognised senior forward.

Milner has been handed the responsibility of leading the line for the Citizens recently and the England international proved his worth to the team by bagging a brace in the 2-1 FA Cup win over Sheffield Wednesday.

City are about to start a crucial period of their season with the club taking on Everton, Arsenal, Middlesbrough and Chelsea in January – four hugely vital fixtures.

Milner is hoping his side will be able to continue their good form and continue to put the pressure on Chelsea.

“Hopefully we’ll be looking to open up a little gap of our own,” he said. “You look at this run (ahead) and people think it is tougher than the games we had over Christmas but – it is an old cliche in the Premier League – there are form teams and out-of-form teams. Every game is difficult.

“All we can do is concentrate on our games and if we can get the results we want to get, it depends on how Chelsea do.”

City travel to Everton on Saturday for a Premier League clash and the visitors are priced at 1.88 to pick up the win, while the Toffees are outsiders at 4.25.