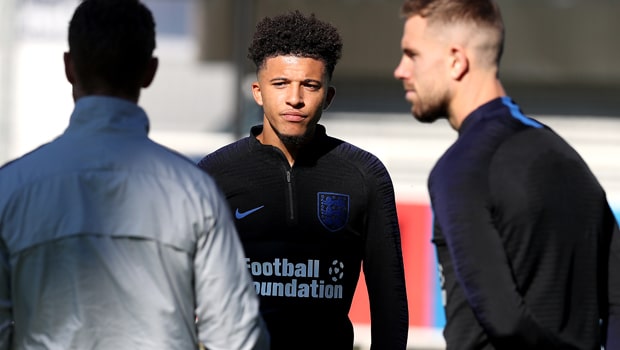 Borussia Dortmund winger Jadon Sancho has admitted his call-up to the England squad did surprise him despite his impressive form this season.

The 18-year-old was named in Gareth Southgate’s squad last week and he will be one of a number of players who could make their debuts in the upcoming Nations League games against Croatia and Spain.

Leicester’s James Maddison was also named in the squad, while Alex McCarthy and Mason Mount will also be looking to impress on the big stage if given the opportunity.

Sancho made the surprise call to leave Manchester City in 2017 and join Dortmund but the move has worked out for the forward.

He has more assists than any other player in Europe’s top six leagues this season and his form certainly caught the eye of Southgate.

Sancho insists the pressure will not get to him but he admits the call did come as a surprise.

He told Sky Sports: “I was at training when I first got the call-up and straight away I called my parents. Obviously they were delighted for me and I couldn’t stop smiling the whole day.

“I was a bit surprised to be fair because obviously I’m so young, I’ve got a lot to learn, I’m just grateful he’s seeing my progress in the Bundesliga and I’m just very thankful.

“I like it a lot. Obviously the culture’s different and the fans have so much passion for the game and obviously support me every week. It’s a dream come true.”

Sancho will be hoping to make his debut in the UEFA Nations League this week. Following Friday’s Croatia game, the Three Lions take on Spain on Monday.