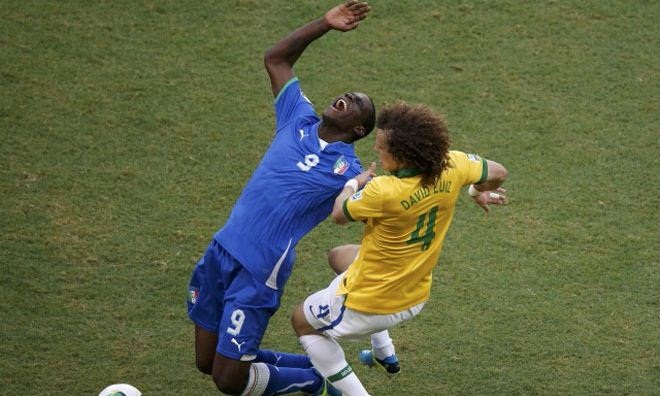 Mario Balotelli will play no further part in Italy’s Confederations Cup campaign, after being struck down by a thigh injury.

The AC Milan striker suffered the problem in his country’s 4-2 defeat to Brazil and will now sit out the semi-final with Spain and also the final, should Italy progress.

Balotelli, who scored in the group games against Japan and Mexico, will be a big miss to the Azzurri’s hopes of making the final of the tournament.

Speaking about the 22-year-old, team doctor Enrico Castellacci said Italy “preferred not to take any risks” with the injury.

Castellacci added: “In agreement with the coach Cesare Prandelli, it was decided to send him back to Milan after speaking to the medical staff at AC Milan, who will look after him.”

Prandelli now has big decision to make ahead of Thursday’s semi-final showdown with Spain, as Balotelli had been used as a lone striker in the previous games.

Experienced Bologna striker Alberto Gilardino is thought to be the most likely replacement, but forwards Sebastian Giovinco and AC Milan’s Stephan El Shaarawy are other attacking options.

There has been some welcome news on the fitness front though for the Italy coach, with influential playmaker Andrea Pirlo winning his race to fit. The Juventus midfielder missed the defeat to Brazil with a calf injury.

Meanwhile, opponents Spain will make a late decision on the fitness of Cesc Fabregas, with the Barcelona midfielder picking up a muscle problem in the win over Nigeria.