World Cup 2014 Qualifiers: Italy one win away from qualification

Posted by Robert Morris on September 7, 2013 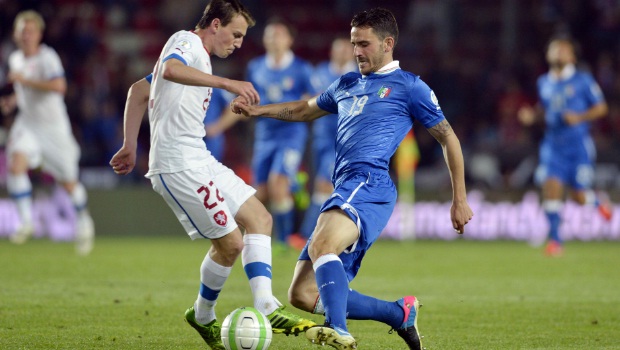 Italy need only one more win to qualify for next year’s World Cup after defeating Bulgaria in Palermo on Friday evening.

Alberto Gilardino’s header in the first half was the only goal of the match, which sealed a 1-0 win for the Azzurri. The win extended the Italians’ lead over the Bulgarians in Group B to seven points with three games left to play. If they beat the Czech Republic in Torino on Tuesday evening, they will become the first European side to qualify for the World Cup.

The Netherlands remain in control in Group D, even though they needed a last-gasp Robin van Persie penalty to salvage a 2-2 draw against Estonia. The draw, coupled with Romania’s 3-0 win over Hungary, saw their lead reduced to six points in the group with three games to go.

World champions Spain saw their lead over France in Group I extend to three points after they beat Finland 2-0 while France were held to a goalless draw in Georgia. All sides in this group have only two fixtures remaining, meaning the French are likely to have to accept a place in the play-offs.

Meanwhile, Germany remain in control in Group C following their 3-0 defeat of Austria on Friday, with Miroslav Klose’s opening goal drawing him level with Gerd Muller’s goalscoring record of 68 for the Germans.

Speaking after reaching this milestone, Klose said: “It’s an honour to be level with Gerd Muller’s record, but I have often said you can’t really compare the two of us as he scored his goals in so few games.”

In Group A, Belgium and Croatia are now assured the top two places. Who will finish top is likely to be decided when the two sides meet next month.

In Group E, Switzerland remain top despite throwing away a three-goal lead against Iceland to draw the match 4-4. Meanwhile, in Group F, the top two, Portugal and Russia both won. Russia have a game in hand over the Portuguese so if they win their final three matches, they will qualify automatically.

Bosnia lost their first Group G match of the qualifying campaign, losing to Slovakia. This allowed Greece to move level on points with them after they squeaked past Liechtenstein.

In Group H, England’s defeat of Moldova and Montenegro’s draw in Poland saw the Three Lions assume top spot in the group on goal difference, while Ukraine moved to within a point after demolishing San Marino 9-0.