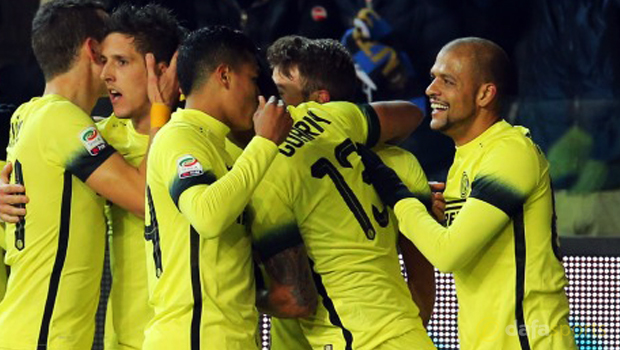 Inter Milan striker Stevan Jovetic was delighted to end his barren run in front of goal during Inter Milan’s 4-0 thrashing of Udinese on Saturday.

The Montenegrin striker, on loan at Inter from Manchester City, had not scored since August but he managed to grab the Nerazzurri’s second after 31 minutes in Udine.

“We put in an excellent performance and had other chances to score more goals, but it’s never easy here,” he told Mediaset Premium.

“I am happy and the goal was a weight off my shoulders. Mind you, in other games, apart from the one against Genoa, I had played well even without scoring.

“Now we must rest and concentrate on the next challenges, starting from the Coppa Italia against Lazio.”

Inter moved clear at the top of Serie A as a result of the win and they will be the league leaders regardless of results elsewhere after this weekend’s round of fixtures are complete.

Jovetic feels there are up to six teams involved in the battle for the title this season but he is convinced Inter can claim the Scudetto.

He added: “I believe in the Scudetto and I said that six weeks ago.
There are another five teams in the running, but if we don’t believe then who should?

“The only way to win is to believe and we will fight it out with everyone.”

Inter host Lazio in the next round of Serie A fixtures and they are 1.85 to take all three points.