Posted by Mojeed Oladipupo on September 14, 2022 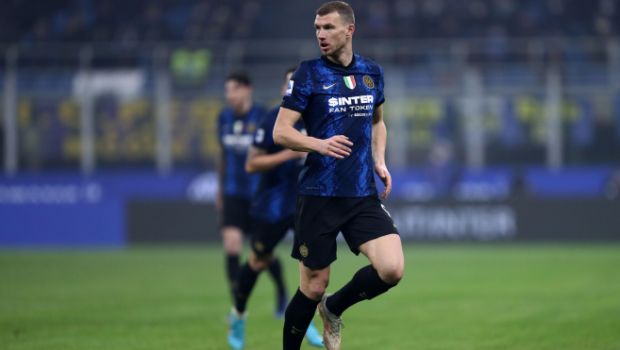 Inter Milan has recorded their first points in the 2022 Champions League after defeating Viktoria Plzen on matchday two of the competition.
The Nerazzurri got the maximum points after Edin Dzeko scored one and created another for Denzel Dumfries.

It was a dominant performance from Inter on their Champions League trip to Viktoria Plzen, aided by a red card for a horror tackle on Nicolò Barella.

The Nerazzurri went into the clash on the back of a 2-0 loss in their opener against Bayern Munich, while Viktoria Plzen were crushed 5-1 by Barcelona.

Dzeko led the line in the absence of injured Romelu Lukaku, while Simone Inzaghi also rested the likes of Lautaro Martinez and Hakan Calhanoglu. He also gave Francesco Acerbi his debut and brought Andre Onana back in goal.

After some attacks, Inter finally broke the deadlock against a very defensive side when Robin Gosens controlled with his back to goal and released the ball to Joaquin Correa, who in turn found Dzeko for a precise right-foot angled drive into the far bottom corner.

Correa and Henrikh Mkhitaryan wasted chances to extend their lead. As they missed chances from promising positions, Dzeko on the counter saw his effort parried by the goalkeeper’s legs.

The Czech team, through Adam, Vlkanova, had a couple of efforts from a range that went over the bar.

After the restart, goalkeeper Jindrich Stanek made a great one-handed save on the Gosens header from an Alessandro Bastoni free kick, with Milan Skriniar unable to turn in the rebound.

He was the sibling block again when he parried the Dzeko strike moments later, while Denzel Dumfries nodded Bastoni’s cross over the bar.
The hosts were reduced to 10 men after a horrible studs-up tackle from Pavel Bucha right on Nicolò Barella’s ankle. It was changed to a red card after a VAR review as the referee had initially issued a yellow.

Inter later made it two just as the hosts were pushing forward. They utilized the spaces left for the counter-attack. Dzeko picked the right pass for a Dumfries angled drive. The Dutchman has finally opened his Champions League goal account.

Obama was again tested by the hosts then he made his first genuine save from a free kick that took a slight deflection off Fortune Bassey and bounced right in front of him. The goalie fingertipped it round the post.