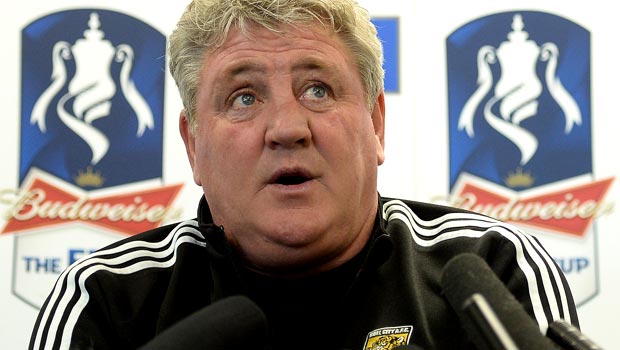 Hull City boss Steve Bruce says that it was difficult to take his players minds off the FA Cup final meeting with Arsenal during the final stages of the season.

Hull won promotion to the top-flight last summer and secured their safety in the division with three games to spare following a 2-2 draw with Fulham.

The Tigers then went on to lose their final three games of the term as Bruce shuffled his starting line-up to give everyone a chance to impress ahead of the trip to Wembley.

Bruce’s side ended the campaign two places and four points above the bottom three and the former Sunderland and Birmingham boss admits that was down to his players thinking about the final.

The former Manchester United captain says that he fully understands the players’ excitement and hopes that they can put in the right performance on Saturday.

Bruce said: “We try but we can’t keep it normal – you can tell that.

“You can’t put a lid on it. They’re playing in arguably the biggest game of their career and that’s what you play football for. All they’ve thought about for four weeks is the FA Cup final.

“When you play for your youth team or your district team you want to do one thing – play in the FA Cup final. There’s a spring in their step and so there should be.

“Everybody enjoys a shock and, if you’re not an Arsenal fan, I’m sure the rest of the world will be rooting for Hull.”

The Gunners have all the pressure of being the 1.46 favourites in the match betting as they finished in fourth place in the Premier League, but they have not won a trophy since victory in this competition in 2005.

Birmingham City of course stunned Arsenal in the 2011 League Cup final and Hull are on offer at 6.62 to spring another surprise, with the draw priced at 4.10.