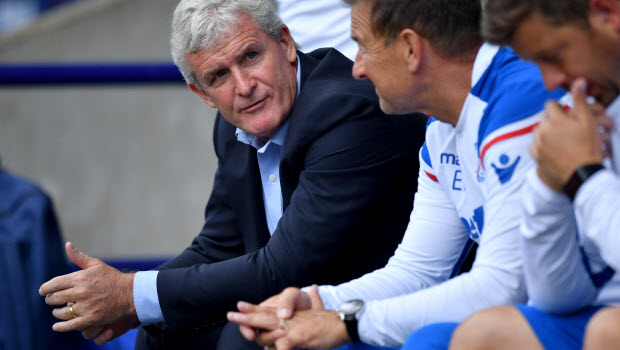 Stoke City manager Mark Hughes admits the transfer window has been slow but he is adamant there will be more activity at the club before the end of the month.

There have also been some notable departures from the Stoke home Stadium with Marko Arnautovic joining West Ham United in a £25million deal, whilst Jonathan Walters, Glenn Whelan and Phil Bardsley have also left for pastures new.

Fans have been slightly frustrated at the lack of activity although the Potters are closing in on the £7.25m signing of Porto defender Bruno Martins Indi, who spent last season on loan in Staffordshire.

That is not the last piece of business Hughes expects to be making before the window closes and he is aiming to find reinforcements for defence, midfield and attack ahead of the new campaign.

“Some windows can frustrate you, and this one has been a bit of a slow burner to be perfectly honest,” he told the club’s official website. “We’re getting there slowly but surely, though, and other things will happen between now and the end of the transfer window.

“We’ll continue to pursue good players and whilst we will miss out on some, as we have done already, we will get others through the door, like we have today.”

Stoke open their Premier League account away at Everton on Saturday and the Toffees, who have invested heavily in their squad, are 1.70 favourites to pick up three points, a draw is priced at 3.75 whilst the visitors are 5.25 outsiders.