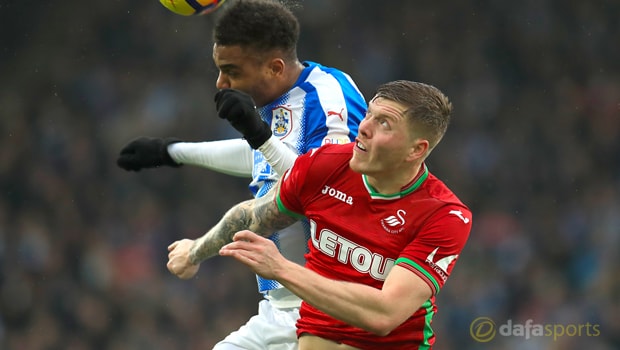 Huddersfield frontman Steve Mounie has urged his team mates to focus on the positives following their goalless draw with relegation rivals Swansea.

The Benin international failed to add to his tally of six goals in the Premier League against Swansea at the John Smith’s Stadium, despite the Terriers playing the majority of the game with an extra man on the pitch.

Swansea were reduced to 10 men just 11 minutes into the relegation six-pointer when Jordan Ayew was dismissed by referee Michael Oliver for catching Huddersfield captain Jonathan Hogg on the leg with his studs.

Huddersfield, who are priced at 3.00 to be relegated, dominated the game from that moment but ultimately failed to break down a committed and well organised Swansea rearguard.

The Terriers had 81 per cent of the possession and mustered 30 attempts, although only four hit the target, in stark comparison to Swansea who failed to register a single shot on or off target.

The draw leaves both clubs level on 31 points, four clear of the bottom three, with eight matches left to play.

Mounie felt Huddersfield were deserving of all three points but insists they must focus on the positives and quickly turn their attention to Saturday’s clash with Crystal Palace.

“It did become difficult, but we had the chances and on another day it could have been two or three,” Mounie said.

“I thought it wasn’t our day when I should have scored from two yards out and I missed it, that should have gone in.

“We would have liked three points but I think the main thing from that is the clean sheet.

“We’ve played well today we just haven’t got the goal. Everyone can take the positives from it and we move on and go and get the three points next week.”