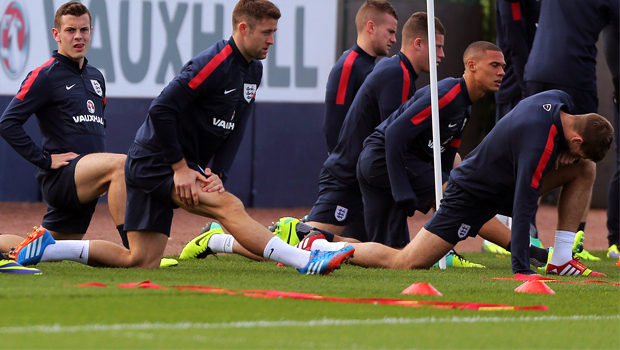 England coach Roy Hodgson has a fully fit squad to choose from ahead of Friday night’s crucial World Cup qualifier against Montenegro.

England need to win their last two group games against Montenegro and Poland to guarantee qualification for the World Cup in Brazil next summer and Hodgson is delighted to have everyone fit.

However Hodgson is refusing to give any clues over who will start the game with Wayne Rooney, Daniel Sturridge and Danny Wellbeck all battling for places in attack.

There is also strong competition for places throughout the rest of the side and it looks as though Hodgson has one or two selection dilemmas ahead of the Wembley showdown.

“We’ve got a fully fit squad of players,” Hodgson said in his pre-match media conference.

“It’s not only the strikers I’ve been impressed by. The whole squad has had a very good week’s training. I’m just happy the game will come along tomorrow night. We feel ready for it.

“I haven’t named the team yet so I can’t make any comments before the start of the game (on individuals), but it’s nice to see a player like Daniel Sturridge come into the squad and be so comfortable at an early stage.

“It’s also nice that so many strikers come into this game having scored goals for their clubs.”

Meanwhile, Hodgson also remains very confident that England will get the job done and qualify for next summer’s finals.