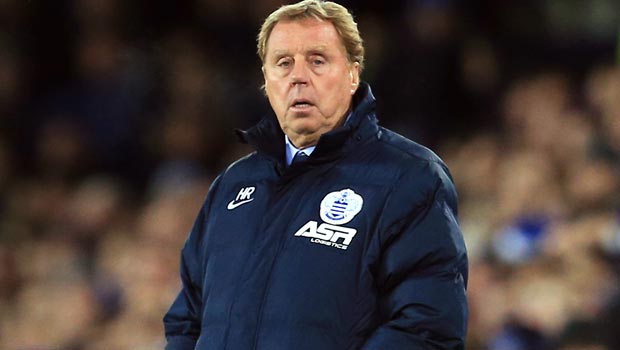 Queens Park Rangers boss Harry Redknapp admitted his team have found life back in the Premier League “difficult” after they crashed to an eighth successive away defeat at Everton on Monday night.

Ross Barkley and Kevin Mirallas struck in the first half for the Toffees at Goodison Park, before Kevin Naismith made it three early in the second half.

Bobby Zamora came off the substitutes’ bench to grab his first league goal of the campaign ten minutes from time but it could not inspire the Londoners into a late fight-back.

It means QPR are the only side in the country who have yet to pick up a point away from home, while they will equal Bolton’s record of nine straight defeats in the Premier League in 1995-96 season if they lose at Arsenal on Boxing Day.

And Redknapp has blamed the gulf in quality between the Championship and Premier League for their struggles on the road.

He said: “If I was managing Chelsea, we wouldn’t have lost eight games away. We have had tough away games. We have come up from the Championship. It is difficult. Our home form has been good.”

Redknapp also felt his side should have ended their barren run on Monday night, but blamed “poor goals” for their downfall on Merseyside.

He added: “Until they scored their first goal, I’ve never felt so comfortable. I thought, ‘We’ve got a big chance here tonight’.

“The crowd was edgy, I thought they played edgy. At half-time, I thought if we could come out and score, at 2-1 the pressure would be on them. Even at 3-1 with 10 minutes to go, they weren’t exactly full of confidence.”

QPR’s home record has been strong with three wins and a draw from their last four at Loftus Road and they are 2.32 to defeat West Brom on Saturday. The Baggies are 3.08 to win and the draw is 3.18.