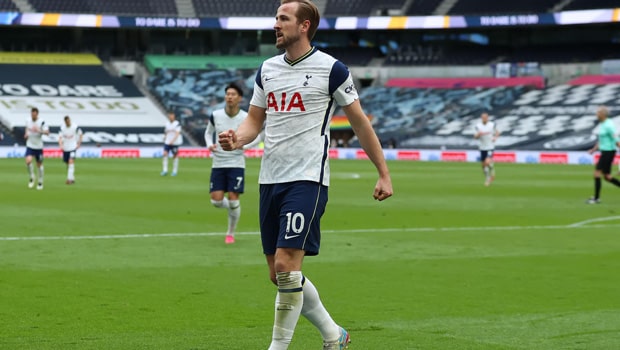 English striker Harry Kane has told the Tottenham management of his desire to leave the club this summer albeit he still wants to remain in the Premier League.

The London club is already searching the market for potential replacements for the 27-year old striker who they are reluctant to sell.

Rivals Manchester United, Chelsea, and Manchester City have all showed interest in the forward.

Kane is one of the many targets of Manchester City as the Citizens look to replace Sergio Aguero who is leaving the club this summer on a free transfer.

Chelsea also has an interest in their former striker Lukaku, who won the Serie A with Inter Milan recently as well as the Norwegian youngster Haaland.

The lack of trophies at the White Hart Lane has left the player frustrated and he wants to sort his future before featuring at the Euros in the summer.

Reports indicate that the club was able to convince Kane to remain at the club with the appointment of Jose Mourinho who replaced Mauricio Pochettino last summer.

Meanwhile, Kane is valued at £120m and also has a contract with Spurs till 2024 after signing a six-year contract in 2018 and he has been vocal about his wish to win titles, something that hasn’t happened in Tottenham recently.

Kane has 22 goals in 33 games for the White Hart Lane side this season in the Premier League and 8 in 8 UEFA Europa League games where the North London club crashed out of the round 16 against Croatian side Dinamo Zagreb.

Spurs are also in danger of missing the UEFA Champions League with 59 points in 36 games in 6th position.