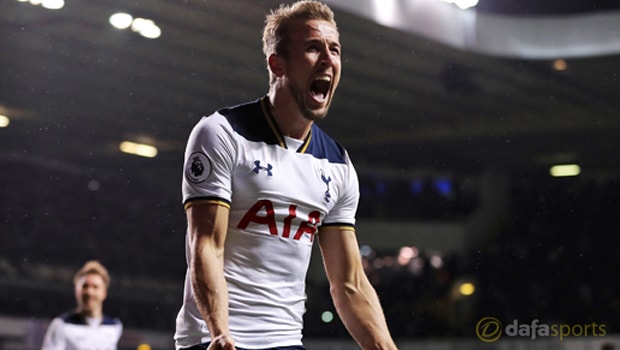 Harry Kane is not panicking about his contract talks with Tottenham and he says he expects to be at the club for a ‘long, long time’.

The England forward has a contract that runs until 2020 in north London but Spurs are keen to tie him down longer term.

Recent speculation in the press has suggested that talks had stalled with other clubs, Manchester United rumoured to be amongst them, said to be keeping tabs on his situation.

The 23-year-old was the hero for Spurs on Saturday, netting two late goals as they rallied to defeat West Ham 3-2 and Kane says it was clear just what playing for his boyhood clubs means to him.

“I’m happy at the club. A lot of people are going to speculate about contracts but I am happy – you saw me out there (on Saturday),” he said.

“There’s not many better feelings than being at White Hart Lane and scoring in a London derby. So yeah, I am happy at the club and want to be here for a long, long time.”

Manager Mauricio Pochettino is keen to secure the long-term futures of his squad, with the Argentine already overseeing new deals for the likes of Dele Alli, Christian Eriksen and Eric Dier recently.

Kane has no cause for concern that his talks with the club will result in anything but an extension of his current contract.

“We are in talks and I’m sure we will get something sorted. I’m not panicking and I’m not demanding anything as I’ve read in the paper,” he added.

“We’re having a conversation and I have no doubts that we will get it sorted. As I say, I want to be here for a long time and I am sure I will be.”

Spurs are 17.00 to win the Premier League title this season while Kane is 15.00 to end the season as leading goalscorer in the top flight.