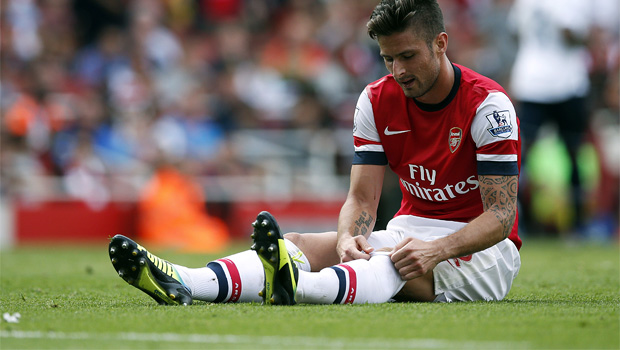 Arsenal have been handed a massive boost with the news Olivier Giroud’s knee injury is not serious and he should be fit to face Marseille.

The Frenchman has started the season in fine form for the Gunners after firing home four goals in as many games but there were fears he could be facing a spell out injured after he limped off against Sunderland.

Arsene Wenger revealed after the game that Giroud had picked up a knee injury but the player has now played down all concerns and says he will be fit for the Champions League clash.

“My knee is fine, do not worry,” he told his army of followers on Twitter. “Thanks for your support.”

The news will come as a relief to Wenger, who has just learned that key winger Santi Cazorla is facing a few weeks on the sidelines with an ankle injury and the loss of Giroud would have been a double whammy.

With Lukas Podolski already on the sidelines, Wenger cannot afford any more injuries to his forwards.

Meanwhile, Giroud is also backing himself to go on and finish as the Premier League’s leading goalscorer.

“I must have a chance,” said the Frenchman. “I feel good and, with these players giving me chances, it has to be a possibility.

“That is something I aimed to achieve when I joined Arsenal. Now that we have Mesut Ozil, it can get even better.”