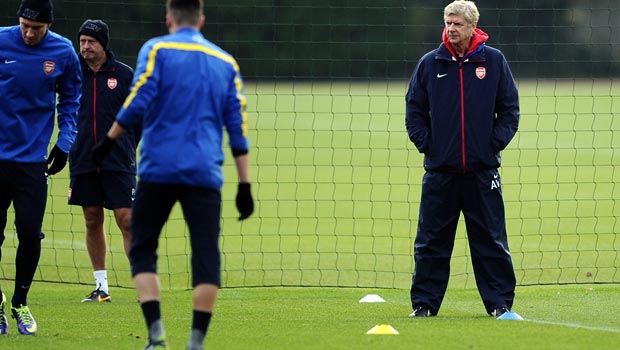 Arsene Wenger insists he will only rotate his squad when necessary and is happy with the way his men are coping with the fixture list.

The Gunners have enjoyed their best opening to a season in years and proudly sit five points clear at the top of the Premier League standings.

They are also closing in on the last 16 of the Champions League and require just a point against Napoli on Wednesday night to secure their passage into the knock-out stage of Europe’s top club competition.

The games will come thick and fast over the next few weeks as the traditional festive programme kicks in, and the north Londoners face Manchester City, Chelsea, West Ham and Newcastle before the end of the year.

It is the time of year where players can easily pick up injuries as overworked legs and cold conditions play their part, and managers tend to rest players to ensure they are fresh for the second half of the campaign.

And, while the French tactician admits he will use his squad players when necessary, he made it clear that continuity is vital to a team’s success.

“We will try to rotate a little bit at times, but never more than two or three players because the stability of the side is so important,”
he said.

And, with the thought of picking up some silverware for the first time in nine years at the back of his mind, Wenger gave an upbeat assessment of the way his charges are currently feeling.

“At the moment we have a stable squad. In some positions I rotate more than others where the stability is important,” he added. “But overall we have no major signs of fatigue medically.”