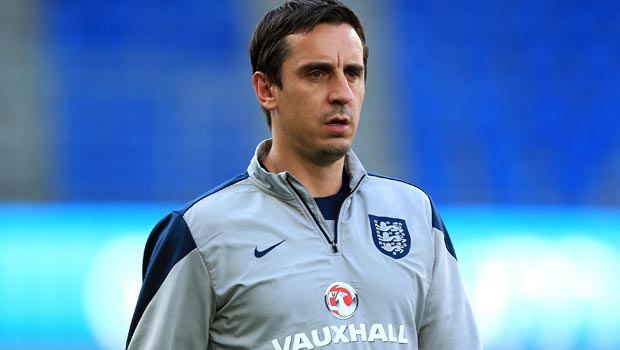 Former defender-turned-pundit Gary Neville has stuck the knife into his old club by accusing Manchester United of being “bullied” by Leicester City on Sunday.

Louis van Gaal’s expensively-assembled side twice threw away a two-goal cushion to crash to a shambolic 5-3 defeat against the Premier League newcomers at the King Power Stadium.

The setback leaves the former champions with just one win so far this season and questions being asked about a defensive collapse against Nigel Pearson’s men.

“Going forward they’re a lot better than they have been in the last 12-18 months and that’s a positive,” said Neville.

“But in the first half, every ball that got played forward from distance a Leicester player won it, whether it was the first ball or the second ball. In the second half, a decision goes against them but make no mistake about it, they’re soft-centred.”

Former England international Neville has expressed his concern at the manner in which a team put together with an influx of recent signings costing £140million could surrender so meekly against a side promoted from the Championship.

The 39-year-old suggested his former club are lacking a ball-winning leader capable of dictating games and said he was worried there could be more of the same ahead.

“There’s no doubt Manchester United are soft-centred. They’re not tough enough,” he added.

“You saw out there today [in the Manchester City versus Chelsea match] that every time a ball went up to Diego Costa he was getting battered by [Eliaquim] Mangala and it was the same at the other end with John Terry and Gary Cahill.

“I thought the midfield three for United and the back four got bullied.”

Manchester United are currently priced 14.00 in the Premier League outright winner market and leaders Chelsea are available to back at 1.60.