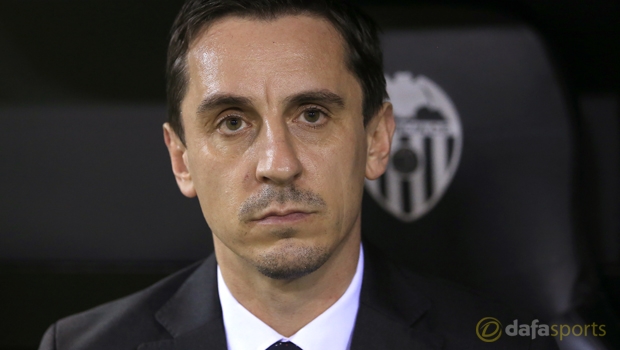 Gary Neville has asked Valencia fans to pack out the Mestalla on Saturday evening and create an electric atmosphere as his side face a crunch game against Espanyol in La Liga.

The former Manchester United full-back is without a win in nine La Liga games since taking charge of Valencia in early December.

Neville admitted earlier this week that the visit of Espanyol represents a “must-win” game for his team, who are currently just four points above the relegation zone.

Espanyol were humbled 5-0 by Real Sociedad on Monday evening and Neville wants to make life tough on the visitors both on and off the pitch.

“We [management] and the team need the fans more than ever on Saturday,” said Neville.

“But I think the stadium will be full, and it will be an electric atmosphere.”

Valencia held a depleted Barcelona side 1-1 at the Mestalla on Thursday in the Copa del Rey, the Catalans having made sweeping changes after winning the first leg 7-0 at the Nou Camp.

Neville too chose to make several changes and the 40-year-old says his sole focus this week has been on getting three points against Espanyol.

“The focus after last week and Sunday has always been the match against Espanyol, and the squad selection [against Barcelona] was about making sure we had as fresh a team as possible for Saturday – that’s obvious,” he added.

Neville admitted after the defeat to Real Betis last Sunday that his time at Valencia could end abruptly if his team do not beat Espanyol.

Valencia are the 1.75 favourites to earn Neville his first league win as boss at the tenth attempt. Espanyol are 5.00 while the draw is 3.60.