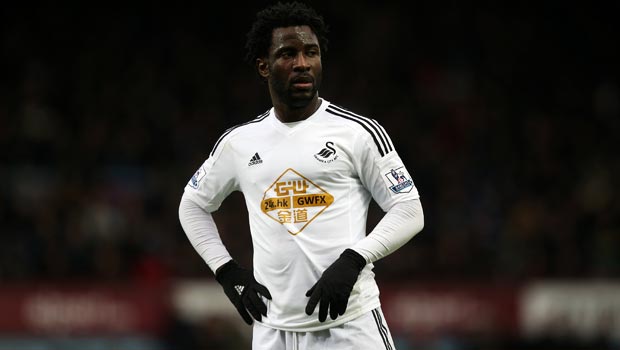 The Ivorian signed for the Swans in the summer of 2013 from Dutch side Vitesse Arnhem and has been a revelation since arriving in South Wales, averaging a goal every other game with 31 goals to his name, 22 of which have come in the Premier League.

The 25-year-old has subsequently been linked with a host of clubs both in England and abroad but is seemingly settled with the Swans, having only signed a one-year extension to his contract last month.

His 35-year-old boss believes the relationship between club and player is a mutually beneficial one.

Monk said: “We managed to sign Wilfried and we’ve done a lot of development with him as far as the team is concerned. He plays to our strengths, the team play to his strengths and it obviously works for Wilfried and Swansea City.”

Hammers boss Sam Allardyce revealed in the week that the Irons tried to sign the former Sparta Prague striker at the same time as Swansea, but in the end plumped for Andy Carroll instead, with the 60-year-old stating that funds were not available at the time for both transfers.

Monk feels the London club did not show they wanted the striker as much as his club did, although he would not be drawn on comparisons between the respective Ivory Coast and England internationals.

Monk added: “It’s the first I’ve heard of it, but if that’s what they were doing they didn’t really want him enough. I don’t look at who is the better player. I look at what Wilf does for us and they will concentrate on what Andy Carroll does for them.”