Gareth Barry: Everton must tighten up 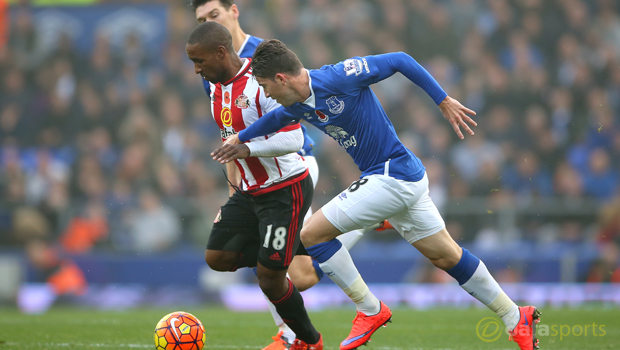 Veteran midfielder Gareth Barry has admitted Everton must tighten up defensively despite Sunday’s emphatic victory over struggling Sunderland on Sunday.

The Merseyside outfit looked comfortable at Goodison Park against the Black Cats as they approached half time with a 2-0 lead, courtesy of goals from Gerard Deulofeu and Arouna Kone.

However, Jermain Defoe struck just before the break and Steven Fletcher got in on the act shortly after the restart to level the affair with 50 minutes gone.

Everton, who are priced at 11.00 to finish in the top four, eventually went on to secure all three points with an impressive 6-2 victory thanks to a spell which saw them net four times in 21 minutes.

Kone ended the game with a hat-trick while Romelu Lukaku added his name to the scoresheet and Sebastian Coates scored an own goal.

The win helped Everton to climb up to ninth in the Premier League table but Barry has warned that the squad need to wake up at the back.

Barry praised the attacking prowess on show but believes they need to work on the defensive side of the game if they are to keep moving in the right direction.

Barry said: “Defensively, throughout the week, I am sure we are going to have to look at a few things because they had chances but we are going to enjoy the win because it is not often to score six goals.

“Their first goal changed the game. If we go in at half-time 2-0 up then we are really comfortable and the confidence is different and their whole out-look to the second-half is different.

“So there are lessons to be learned there because with 30 seconds to go, we’ve got the ball in their half and all of a sudden it is in the back of the net.

“We should be better than that and have enough experience on the pitch to stop that happening.”