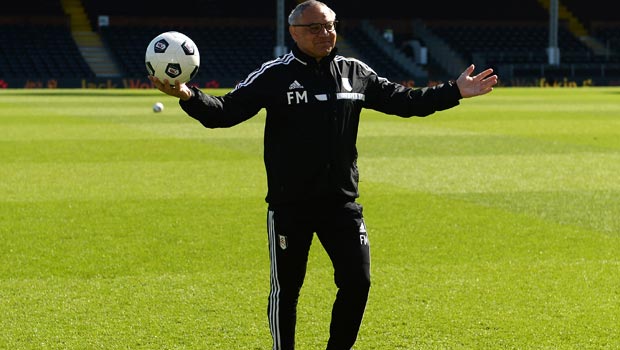 Fulham boss Felix Magath insists “there is hope” that the side can avoid relegation from the Premier League this season after they secured two successive victories.

The German tactician has always maintained his belief that he could prevent the Cottagers from dropping into the Championship since he arrived to replace Rene Meulensteen in mid-February.

However, the situation looked bleak a fortnight ago when the side were seemingly adrift of the final position of safety in the table.

But a 2-1 win at Aston Villa was followed by a 1-0 home win against fellow strugglers Norwich at Craven Cottage on Saturday and the situation looks much more favourable as Fulham are just two points behind the fourth-bottom Canaries with four games remaining.

Norwich’s run-in is far more difficult too as they have home games against Liverpool and Arsenal either side of trips to Manchester United and Chelsea.

Fulham’s next game is against Tottenham at White Hart Lane, while they have respective home games against FA Cup finalists Hull and Crystal Palace either side of a trip to Stoke, which has left Magath feeling confident.

He said: “There is still hope. In the last weeks I was hopeful we would be able to manage the situation and win some games and now we have won two games in a row. It helps us to be confident.

“And now there are more people than four weeks ago who are thinking we will stay in the league. We didn’t play so well but there was a lot of pressure on the players. At the moment, three points is the only thing that counts.

“Two wins in a row is very nice but it is not enough to stay up so we have to take care we get more points.”