Posted by Fred McKinley on September 7, 2015 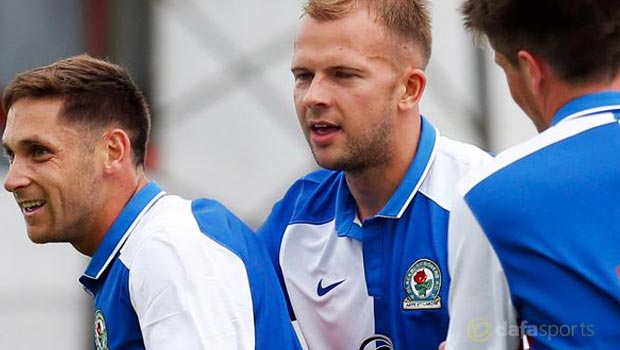 Former Blackburn Rovers star David Dunn has backed Jordan Rhodes to keep delivering the goods despite missing out on a move to Middlesbrough.

The Scotland international had been linked with a switch to the Riverside for most of the summer and the Rovers board are believed to have rejected a £12m bid for the player.

It prompted owners Venky’s to warn that they had no intention of selling their star man to a Championship rival and their unwillingness to let him go means he will remain at Ewood Park until at least January.

Dunn played alongside Rhodes for three seasons before moving to near neighbours Oldham on a one-year deal in the summer.

Although he concedes the money on offer meant it could have been a good idea to sell the 25-year-old, the veteran has backed him to keep producing the goods for the club.

“Rhodesy is a fantastic finisher and I’m sure everything that has happened this summer won’t affect him,” he is quoted as saying by the Lancashire Telegraph.

“He’s a really level-headed lad, a lovely lad, and there is no question he will give 100 per cent every time he pulls on a Blackburn Rovers shirt.

“And there is no question he will continue to score them goals.

“However, if I’m being brutally honest, when they got the bid in from Middlesbrough, I think for all concerned it would have been a good move to accept it.”

Having previously been tipped as potential promotion candidates, Blackburn are yet to win a match this season and have been lengthened to 23.00, while they are now down to 4.50 to be relegated.