Focus on promotion in-Stead for Bantams 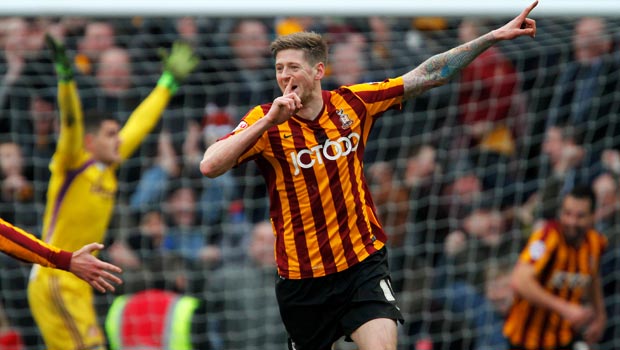 Goal-hero Jon Stead says Bradford City barely had time to celebrate their FA Cup fifth-round victory over Sunderland as they have to focus on their League One promotion bid.

The Bantams caused another big cup shock on Sunday as they knocked out the Premier League side by winning 2-0 at Valley Parade, building on the stunning 4-2 victory over Chelsea in the previous round.

Stead scored the second goal, after an early John O’Shea own goal had given them the lead, to maintain his record of scoring in every round so far, but the striker says after a brief celebration in the dressing room, the focus quickly shifted to their promotion charge in the third tier.

Phil Parkinson’s side are in the thick of the play-off race, and a win over Leyton Orient this week could move them back into the top six (Bradford – 161.00 to win League One).

Stead said: “We had a couple of minutes’ celebration in the dressing room, but we’ve got the Orient game coming up this week so it’s a quick turnaround.

“We’re having to postpone league games because of our cup ties, but we’re happy about that. It’s been a fantastic effort from the lads.”

However, Stead was delighted with the win although he stressed scoring against his old club meant little as it was more about the overall success for Bradford.

He added: “This tops the Chelsea win because of the expectation on us.

It’s ended up, dare I say, a comfortable victory. The fans were magnificent and we made things hard for Sunderland right from the off, getting in their faces.”

“My spell at Sunderland wasn’t in my thoughts. The Sunderland support was fantastic, they stuck around to clap us off.”