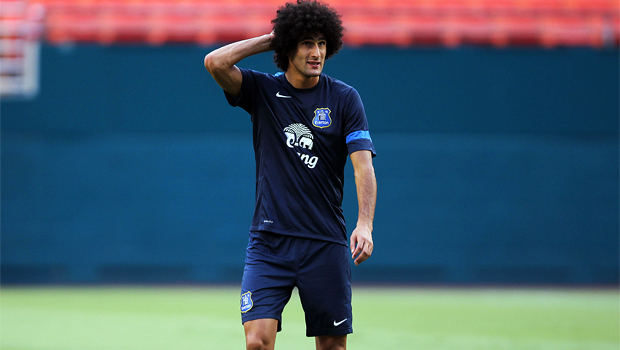 Everton manager Roberto Martinez confirmed the buy-out clause in Marouane Fellaini’s contract expired at end of July and he now expects midfielder to remain for this season.

The Belgium international has been heavily linked with a move away from Merseyside this summer, with Manchester United interested and Arsenal also thought to be keen.

However, no bids have been made for the 25-year-old and, crucially, the buy-out clause which would have left Everton powerless to keep him if they received an offer of £23million has now expired.

“Marouane had a buy-out clause where it was very straightforward. If someone met that valuation, the club had no say,” Martinez said.

“That finished on July 31 so you can imagine during that period everyone was a bit expectant about what would happen. Once that date went, you just focus on working for the next season.”

Leighton Baines has also been the subject of interest from United but he, too, remains at Goodison Park and, instead of preparing himself for players to leave, Martinez says he would still like to add to his squad before the transfer window closes on September 2.

“You always need to keep looking to try to help the players we’ve got at the club but we’re not looking for a specific number. If we don’t bring anyone in, I’ll be happy.”

Martinez has so far signed Gerard Deulofeu on loan from Barcelona for the season while he also raided former club Wigan to sign Joel Robles, Antolin Alcaraz and Arouna Kone.