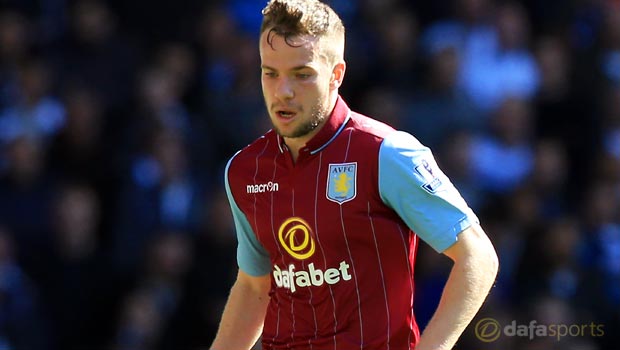 Tom Cleverley says his Aston Villa side have nothing to fear ahead of Sunday’s FA Cup semi-final against Liverpool.

Despite battling against relegation for much of the campaign, the Villans have been excellent in the cup and know one more victory will see them qualify for their first final since 2000.

However, standing in their way is a Liverpool side who, despite recently losing crucial fixtures against Manchester United and Arsenal, still have designs on a top four finish in the Premier League.

It means the Reds are understandably the 1.57 favourites to go through, with the draw 4.20 and Cleverley’s side priced at 5.50.

Villa themselves have plenty of talent, most notably in the trio of Christian Benteke, Gabby Agbonlahor and Fabian Delph.

They have also been in decent form since the arrival of boss Tim Sherwood in February, beating the likes of West Brom, Sunderland and Tottenham to put themselves in a good position in their battle against the drop.

Having also defeated the Reds at Anfield back in September, Cleverley admits the squad are full of confidence and sees no reason why they cannot cause their opponents plenty of problems on Sunday.

He told the club’s official website: “Looking at the semi-final, I think we have dangerous players. We have players who can win games.

“Look at the likes of Christian, Gabby and Delphy. They are right on top of their game.

“I am sure Liverpool will be assessing our threats and pointing out what we have got in our locker. We’re coming into it in good form.”