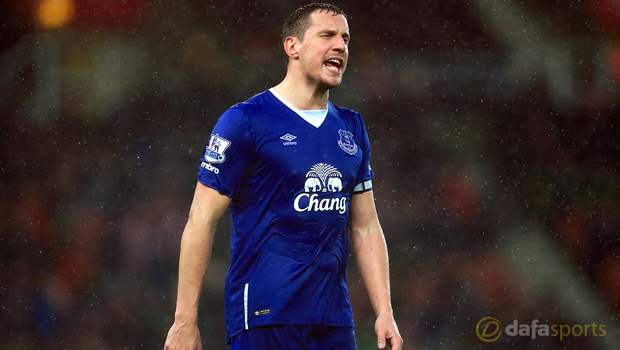 Everton skipper Phil Jagielka says having competition for places at the back is finally seeing the club put their defensive worries behind them.

The Toffees have conceded just one goal in five games recently with Jagielka forming a stable partnership alongside Ramiro Funes Mori in central defence.

John Stones has been either sidelined or injury in recent weeks but according to Jagielka it is vital for Everton to have three strong central defenders competing for two starting places.

Further back, Joel Robles has been enhancing his case to become number one goalkeeper ahead of veteran Tim Howard.
Robles saved a crucial penalty in the FA Cup victory at Bournemouth last weekend.

Jagielka feels Roberto Martinez has now got the right mix at his disposal.

“It’s definitely something we need at a club this big. As far as centre-halves go, we need to have at least three players competing for the positions. It keeps you going and on your toes.

“There’s been a few injuries here and there, so it’s important that the people stepping up are plenty good enough, and they are.”

The England centre-back singles out 24-year-old summer arrival Funes Mori for strong praise. Jagielka has been impressed with the Argentine’s ability to settle into English football and immerse himself in English culture so quickly.

“Ramiro is a nice lad and has done a fantastic job, popping up with some important goals. He’s great to have around the place and speaks good English,” he added.

“The communication is what we want, so he has settled in very well for a lad coming from a different country.

“He has taken on the English lifestyle pretty well as well, and he’s quite amusing around the place, so perfect for our changing room.”

Everton are 8.00 to win the FA Cup this season after they were drawn to face Chelsea at Goodison Park in the last-eight.