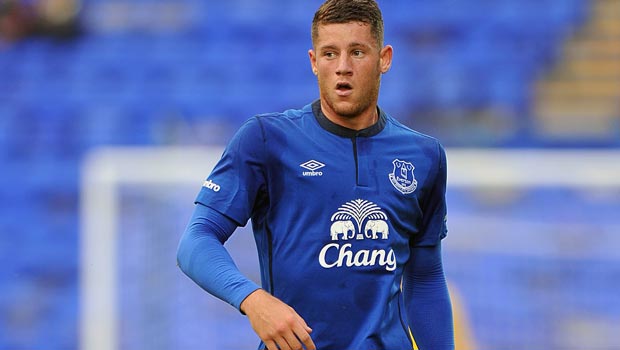 Everton boss Roberto Martinez says Ross Barkley could return in a month but Leon Osman and Samuel Eto’o have picked up knocks ahead of the Premier League clash at West Brom on Saturday.

England midfielder Barkley is ahead of schedule in his recovery from a medial knee ligament injury sustained on the eve of the season last month, but Martinez believes he won’t be available for selection until mid-October.

“Ross Barkley is progressing well but he is still receiving treatment and he is in week four now,” said the Everton manager.

“He is probably a couple of weeks ahead of where he should be but he is halfway through his recovery period.”

Martinez revealed that Steven Pienaar, Arouna Kone, Bryan Oviedo and Romelu Lukaku all joined the group for training on Thursday, which he described as “very positive”.

But Osman (calf) and Eto’o (groin) will need to be assessed by the club’s medical staff over the next 48 hours to determine if they can be involved at The Hawthorns.

Kone has not featured since October but played in a friendly against Stoke this week and is edging closer to a first-team return.

“Arouna played 55 minutes and it was a real positive, exactly the same as Bryan Oviedo (making his comeback from a broken leg),” said Martinez. “They are on their way back and while it is impossible to give a date, I don’t think they are very far away.”

Everton are the 2.16 favourites to claim all three points against West Brom on Saturday, despite not having won a match so far this season.

Albion are 3.20 to record their first Premier League win of the campaign while the draw is available at 3.39 in the 1X2 betting.