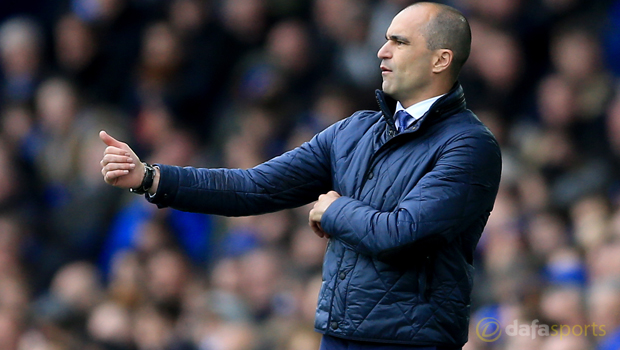 Everton winger Gerard Deulofeu insists manager Roberto Martinez is the right man for the job and he admits the players need to take more responsibility.

The former Wigan boss has come under increased scrutiny in recent weeks, with Everton currently sat 11th in the Premier League table.

The Toffees, 3.50 to win the FA Cup, have drawn the joint-most games in the division this season and they are currently 19 points off the top four.

Martinez’s men take on Liverpool in midweek before taking on Manchester United in the FA Cup semi-final at Wembley on Saturday, two games which could define the club’s season.

Speaking ahead of the massive fixtures, Deulofeu insists his side need to step up and take more responsibility, instead of Martinez taking all the blame should things go wrong.

He told Sky Sports News HQ: “The manager’s work is so good. We need to stay altogether and all take responsibility, because the manager does not play on the pitch.

“Yes, it is a difficult position, but now is no time to think about this, we have a nice week with the derby and the chance to reach the FA Cup final. In my opinion I am happy with my coach.

“This week is the most important, because the results have been bad this season, and we stay in a bad position, and we have a chance in the FA Cup.

“It’s so important, and we need to go to the semi-final with confidence, and first we need to play at Anfield together, to win and take three points.”