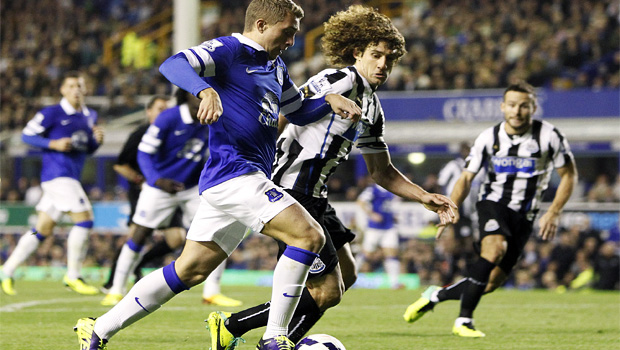 Everton entertain Newcastle on Monday night and are bidding to avoid defeat in the Premier League for the sixth time this season.

The Toffees are the only unbeaten team having won two and drawn three of their five games so far in the post-Moyes era and know that victory will move them up to fourth place.

The Merseyside club did lose out to Fulham in the Capital One Cup last week, but new manager Roberto Martinez has his sights set on a place in Europe via a decent end-of-season position in the league, and will be confident of taking all three points against a side languishing in 16th place in the table.

The Blues’ new signings have all contributed including Gareth Barry who is poised to become only the 10th player to make a 500th Premier League appearance.

Full-back Leighton Baines found the net twice from free-kicks against West Brom and will again be a threat from set-pieces, and visiting boss Alan Pardew admits that his defence will be under pressure.

“They are unbeaten this year, but no matter when you go to Goodison you know you are in for a tough game,” he said. “Whether that is under Moyes or Martinez, it’s always been tough.

“But it’s a game we are looking forward to – a Monday night game under floodlights – and we’re ready for it.”

The Magpies have their own strike threat in the shape of Papiss Cisse who opened his account for the season in the 2-0 Capital One Cup win over Leeds United last week.

And with players of the quality of Loic Remy, Hatem Ben Arfa and Yohan Cabaye to call on, Pardew will hope to at least match last season’s corresponding fixture that ended all square at 2-2.