Everton midfielder Darren Gibson delighted to be back 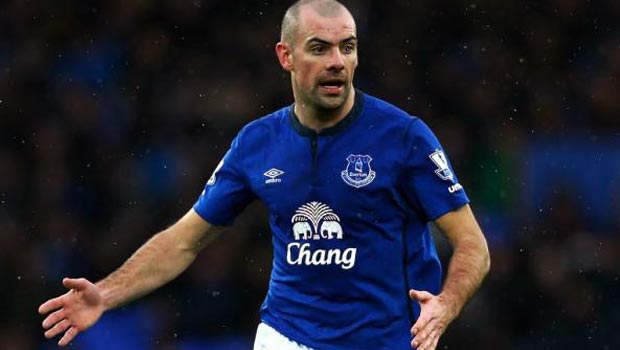 Everton midfielder Darren Gibson admitted it is great to be back and playing again as he stepped up his recovery from a lengthy injury, coming off the bench against Leicester on Sunday.

Gibson suffered a serious anterior cruciate ligament injury while representing the Republic of Ireland against Kazakhstan in October 2013, which kept him out for the majority of the 2013-14 campaign.

The former Manchester United man returned to action briefly but was again struck by injury on international duty in the European Championship qualifier against Scotland in November 2014.

The 27-year-old was welcomed back into the first team squad on January 31 when he made an appearance off the bench in the 1-0 win at Crystal Palace.

The Republic of Ireland international has made four further appearances as a replacement and is slowly working his way back to full match fitness.

Roberto Martinez may look to hand the midfielder a start in Thursday’s Europa League last-32 second-leg tie against Young Boys, with the Toffees already leading 4-1.

Gibson insists he is raring to go as he looks to re-establish himself under Martinez, but the Spaniard may be reluctant to rush him back and cause further aggravation.

Gibson said: “It’s been frustrating because I had a good pre-season, but maybe it wasn’t right and I wasn’t fit enough when I came back in at the start of the season,” Gibson told Everton TV.

“Mentally, it was frustrating for me but I’ve worked hard and hopefully now that’s me back to my best.

“It’s the best I’ve felt in the last 18 months, so fingers crossed [it can continue] and it’s good to be back.

“I want to play as many games as I can, every time I set a target or goal, I end up breaking down again so I’m just going to try and stay on the pitch for as long as I can.”