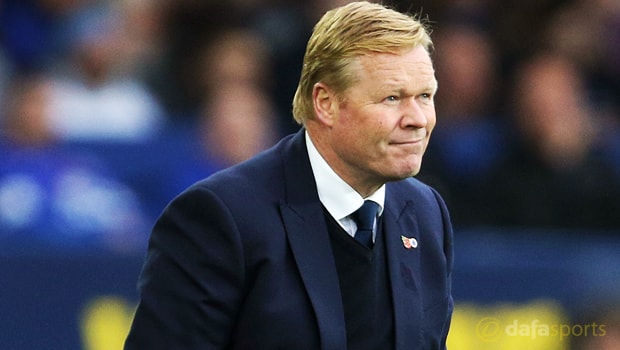 Everton manager Ronald Koeman says that claiming a place in the Europa League next season is still the main aim, with the long-term goal to challenge for the title.

The Dutchman was appointed as the successor to Roberto Martinez over the summer and has made a positive start on Merseyside.

Everton, who are priced at 17.00 to finish in the top four, enjoyed a strong start to the Premier League campaign and went unbeaten in their opening five fixtures.

However, the Toffees won just once in the next six league outings and currently sit seventh ahead of the return to action against Swansea on Saturday.

Koeman set his squad the target of securing European football during his first year in charge and feels they must find better levels of consistency.

“The ambition this season will be challenging for European football,” Koeman said. “We have introduced some new players last summer and it takes time to find the right balance in the team and to find consistency, but I feel it is not far away.

“If we are competing for a place in the Europa League in my first season here, then that would be a good achievement. I think this is possible, but we can see a lot of teams with the same ambition as us in the Premier League, so it will not be easy.”

The former Southampton boss is hoping to build something special during his time at Goodison Park and insists the long-term ambition is to be right at the top of the Premier League.

He added: “It is a long time since Everton were winning trophies and challenging for the title in England, but that is what we want to do.

“This is a very big club and the aim is to be in the top positions again, challenging for the important places in the Premier League.”