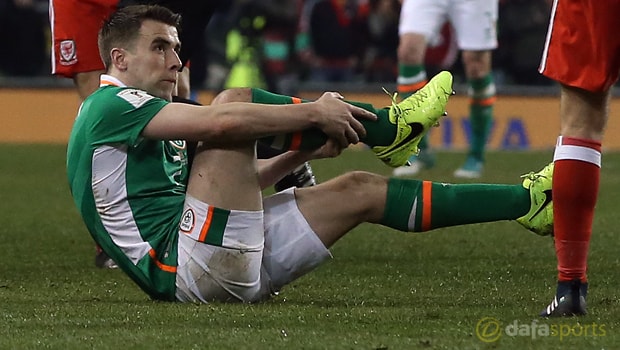 The Republic of Ireland international had surgery on Saturday afternoon after suffering the injury on Friday night while playing for his country.

Coleman captained the Irish against Wales in the 0-0 draw but his night ended early when he was on the wrong end of a heavy challenge from left-back Neil Taylor.

His injury was visible from the stands as he suffered a double leg break which will now see him miss the rest of the campaign.

The 28-year-old could also miss the majority of next season but Koeman insists everyone is behind him.

He told reporters: “I haven’t been able to speak to Seamus as yet and I hope to do so this afternoon.

“But he will be aware that the thoughts of his team-mates, the coaching staff, everyone at the club and all Evertonians are with him at this time.

“No one ever wishes to see something like this happen to any player, much less one of our own.

Seamus will face a lengthy recovery period and we will support him throughout this.

“He is a really strong character and he has a great family around him and we, his extended family at Everton, will be here for him to help him get through this over the coming days, weeks and months.”

Koeman will now need to reshuffle his defence for next Saturday’s Merseyside Derby clash with Liverpool.