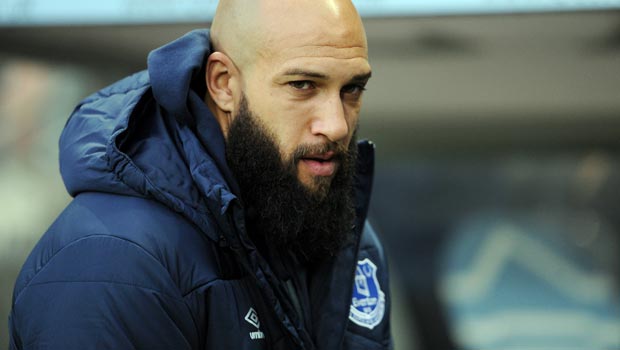 Everton manager Roberto Martinez has confirmed the club are in the market for a new goalkeeper following the injury to American international Tim Howard.

The 35-year-old was struck down with a calf problem in the Boxing Day fixture against Stoke City and will be out of action for the next five to six weeks as a result.

Howard has already missed the 3-2 loss at Newcastle on December 28 and the disappointing 2-0 defeat away at the KC Stadium on New Year’s Day against Hull City.

Spaniard Joel Robles, who has taken over as the number one for the time being, has come under scrutiny for the last two performances and the 24-year-old is under pressure to keep his place in the starting 11.

Martinez has now revealed that the Toffees are scouring the market for a new goalkeeper and the manager says a permanent signing is the only option the club are looking at.

“Obviously Tim Howard is out for a while and we are a little bit exposed,” he said. “If we could bring in a goalkeeper it would be a long-term aspect.

“We need to be relying on experienced hands. There are a couple of options that could fit in well, but I won’t bring someone in for the sake of it.

“They need to fit in well with the way we want to play. I would rather make it as a long-term signing because we only have Tim and Joel.”

Sampdoria goalkeeper Sergio Romero is one player who has been linked with a move to Goodison Park and Everton are reportedly preparing a January offer.

The Toffees are in terrible form in the league at the moment having lose four on the bounce and they face a tough challenge to get back to winning ways against Manchester City on Saturday.

The Citizens are favourites despite being away from home at a price of 1.88, while the hosts are a big outside shot at 4.25.