Everton manager Roberto Martinez on the defensive after Baggies loss 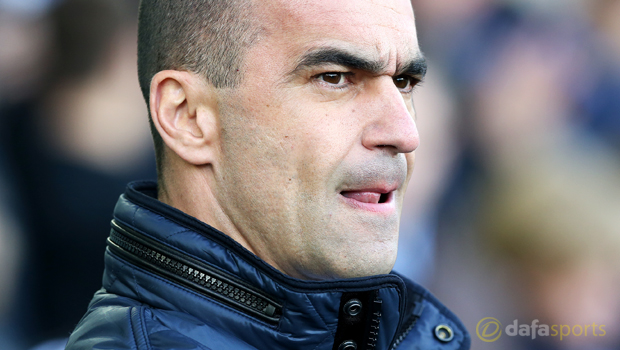 Everton manager Roberto Martinez attempted to defend his side after they suffered their latest home setback of the season at the hands of West Brom on Saturday.

Salomon Rondon’s 14th-minute goal proved enough to give Tony Pulis’
Albion the victory but Everton laid siege to the Baggies goal for much of the game.

The woodwork twice denied the hosts in the opening half while a succession of scoring chances passed them the home side by throughout the contest.

Everton had 34 attempts on goal compared with just five for West Brom while the Toffees also enjoyed 76 per cent possession over the 90 minutes.

Despite those stats, the home side were not able to breach Ben Foster’s goal and have now managed to win only four home games in the Premier League from 13 this season.

Martinez was at a loss to explain the latest defeat and felt there was little more his troops could have done against West Brom.

“I think we didn’t do anything wrong, it’s one of those games where you find it very difficult to see how you concede from the only corner West Brom had, and their one shot on target,” the Spaniard said.

“We had 34 opportunities, I thought we looked bright enough to know how to open this West Brom team. We hit the post, hit the crossbar.

“The effort, and the way we played the game, I couldn’t fault. It’s just one of those moments in football that is sometimes difficult to explain.”

There appeared to be a nervous tension emanating from the Goodison Park stands from very early on against West Brom and Martinez hinted his players need the supporters to get behind them during testing times if they want to turn games around.

“I feel some of the margins are there for us to change them quickly, and to rely on a bit of a chemistry between us and our fans,” he added.

Everton are in cup action next weekend at Bournemouth and the Toffees are now 15.00 to win the FA Cup.