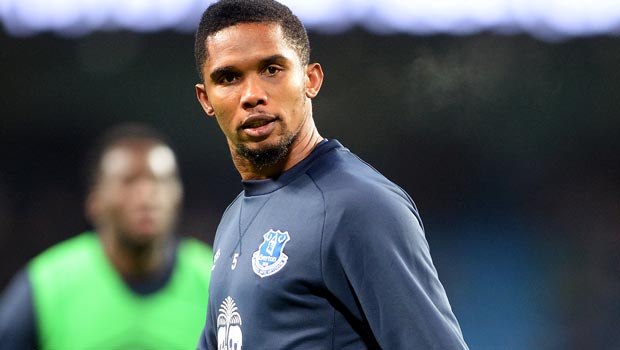 Everton manager Roberto Martinez says he will not be signing a new striker this month, despite allowing Samuel Eto’o to join Sampdoria.

The Toffees announced this week that ex-Cameroon international Eto’o had been allowed to move to Italian side Samp after just over six months with the Toffees.

The 33-year-old has signed a two-and-a-half-year contract with the Serie A outfit, leaving Everton seemingly short of attacking options.

The only two recognised strikers in the squad following Eto’o’s departure are Romelu Lukaku and Arouna Kone.

However, Martinez believes the duo will be enough to get the club through until the end of the season, with the Spaniard admitting he has other positions he would rather fill first.

A creative midfielder would appear to be the priority but Martinez has hinted that he could keep his powder dry this month, claiming he is not a big fan of the winter transfer window.

“You never get value for money, first and foremost, and you will not get players you have been following for a long time,” Martinez said of the January transfer window.

“And if you want to rely on January to find solutions for your season then it is a big gamble.

“But we will carry on working.

“With Arouna Kone being fully fit, I see him as a replacement for Samuel’s position and it is more about trying to get the players back from injury.”

Martinez went on to say that he had no intention of letting Steven Pienaar leave after the South African was linked with a move to Real Sociedad this week.

While he wants to keep Pienaar, the Everton boss will have to do without the injured midfielder this weekend when he takes his side to Crystal Palace.