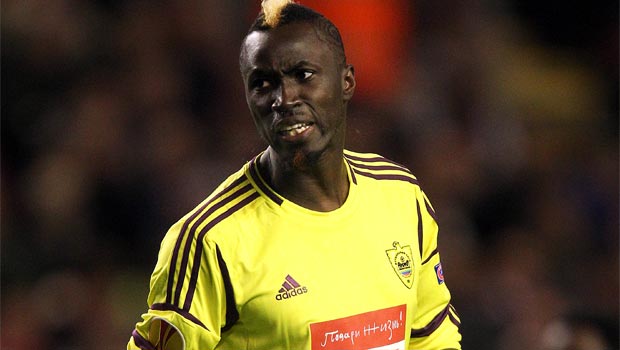 Everton manager Roberto Martinez says he is hopeful of securing a work permit for loan signing Lacina Traore from Monaco.

The Ivory Coast international is set to join the Blues for the rest of the season if he is granted a permit as Martinez looks for a replacement for the injured Arouna Kone and the recently-departed Nikica Jelavic.

Traore, who only joined Monaco from Anzhi Makhachkala earlier this month, was close to joining West Ham before Everton stepped in and the Merseysiders must now apply for a work permit as the look to secure the 6ft 8in forward’s services.

Martinez believes Traore would be the perfect addition to his squad as they chase a top-four Premier League finish in the second half of the season.

He said: “Lacina is a player who I really like and is someone who would fit in really well in the role we want the player to come in. There are a couple of hurdles that we need to get over; the work permit is something we need to look into.

“If we can get through that he will be a player we will be very keen to add to the squad. He had a recent soft tissue problem but it is not too bad. He is a few days away from being fully fit and we were quite happy with the medical.

“Every work permit is difficult. We have a very strong case of showing why we need Lacina with us.

“He is a very talented footballer. He is only 23 and has already had a couple of moves (totalling) nearly £30million but every work permit is a difficult one and we will try our best.”

Meanwhile, Martinez revealed key defender Seamus Coleman suffered a hamstring injury in Monday’s 1-1 draw at West Brom and he is keeping his fingers crossed it is not a serious setback.

He added: “Coleman felt his hamstring a little bit and we will assess him. It’s not a good sign because he would never normally want to come off.”

Everton are next in action on Saturday when they take on Stevenage in the FA Cup fourth round before the Merseyside derby against top-four rivals Liverpool at Anfield next Tuesday (Everton 3.94, Liverpool 1.74, draw 3.68).