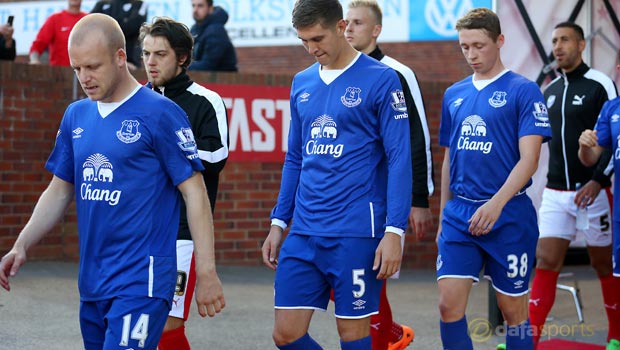 Everton forward Steven Naismith admits he was open to leaving the club this summer but is now hoping to play a bigger role in the side going forward.

The Scotland international was the subject of an £8million transfer deadline-day bid from Norwich but the Toffees turned it down.

The 29-year-old says he was frustrated not to have been sold at the time, having struggled to cement a regular spot in Roberto Martinez’s starting line-up.

Naismith has often found himself on the bench since moving to Goodison Park from Rangers in 2012 and admits it has been tough having to watch from the sidelines.

However, after coming on as a substitute and scoring a hat-trick in Everton’s 3-1 win over Chelsea on Saturday, the Scot hopes he will now be involved more often.

“When you are not playing every week it is hard to look past these opportunities (to leave the club),” said Naismith. “But it was out of my hands because the manager said he didn’t want me to leave.

“Things can change so quickly in football, though. Hopefully I’ve shown my worth to the team. At my age, you do wonder how long it is going to be before you are playing regularly again.

“I was still coming on in games with a good bit of time to play, so that gave me hope that I could still be here at Everton.”

Naismith’s hat-trick means a third of his 18 league goals for Everton have come against Chelsea.