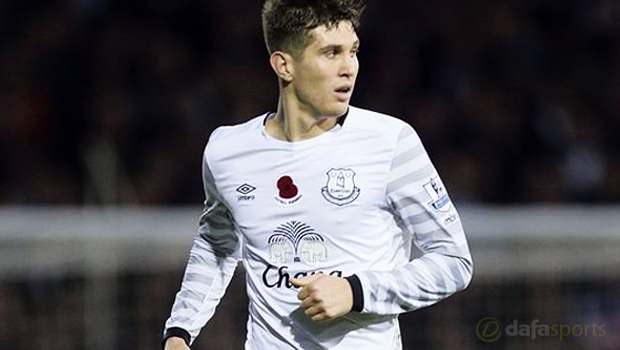 The England defender shone as the Toffees came from behind to secure a 1-1 draw at Upton Park, with Romelu Lukaku equalizing an opening goal from West Ham’s Manuel Lanzini.

Everton fought all summer to keep Stones at Goodison Park as Chelsea seemed determined to take the 21-year-old to Stamford Bridge, but Martinez held firm and the former Barnsley defender is now playing a vital role in the club’s back four.

With the senior trio of Leighton Baines, Bryan Oviedo and Phil Jagielka all out injured, it means Stones is taking a senior role alongside the likes of Premier League newcomers Brendan Galloway and Ramiro Funes Mori.

Martinez was full of praise for Stones after the draw at Upton Park, admitting he was impressed at how the youngster led an inexperienced Everton defence.

Martinez said: “It was a really interesting challenge for John because it wasn’t just about defending – it was about leading that back four.

“We had five defenders injured today. John had to lead the defence – and that’s where I was most impressed.

“We had Tim Howard and Gareth Barry sandwiching that back four but there were very few Premier League appearances when you look at Brendan Galloway and Ramiro Funes Mori.

“I thought he was immense in the way you have to defend a striker like Andy Carroll, then take responsibility in the way he started the play out from the back. It was a magnificent performance.”

Everton face Aston Villa at Goodison Park next weekend and are the 1.50 favourites to win the game, while Villa are on offer at 6.50 and the draw is priced at 4.20.