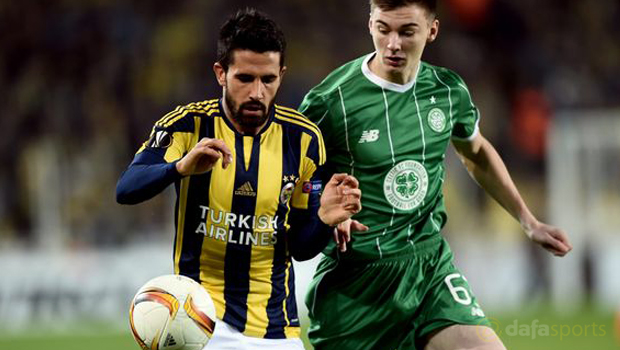 Tierney made his Celts debut towards the back end of last season and has managed nine appearances to date this term for the Scottish champions.

The 18-year-old impressed in Celtic’s 1-1 Europa League draw at Fenerbahce on Thursday as he managed to keep Serbian winger Lazar Markovic, on loan from Liverpool in Turkey, largely quiet over the course of the match.

Deila has been delighted with Tierney’s progress this season and he has predicted a bright future for the academy graduate in Glasgow.

“I wouldn’t change Kieran Tierney for anyone,” the Norwegian boss is quoted as saying by the Daily Record. “You see his attitude, it’s always first class and he’ll only get better.

“He has already shown he can play at a high level in Europe and he’s only 18 years old.

“Markovic is a top player so it says something special about KT.

“He is already worth a lot of money to Celtic and we’re going to keep him here.”

Celtic were knocked out of the Europa League despite the draw in Istanbul as they failed to win a group game.

Deila has admitted their performances in Europe were not good enough but he feels they will be able to challenge on the continent next season.

Fenerbahce are 34.00 to win the Europa League outright and Molde, who also progressed out of Group A with the Turkish side, are 101.00.

German giants Borussia Dortmund are the 7.00 favourites and Manchester United are 11.00 following their Champions League exit.