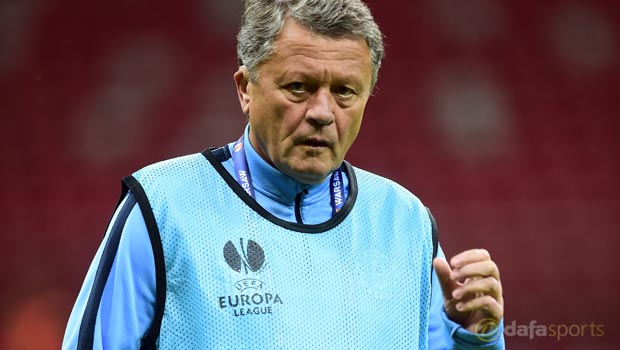 Dnipro coach Myron Markevych has called on his players to put their nerves to one side as they look to cause an upset against Seville in the Europa League final on Wednesday.

The Ukranian club head into the match, their first ever European final, as the underdogs and Markevych admits that his players are feeling nervous ahead of the European showpiece.

In the other corner, Sevilla have plenty of experience as the defending champions and will become the first team ever to lift the cup for a fourth time if they defeat Dnipro in Warsaw’s National Stadium.

Sevilla are full of confidence after hammering Fiorentina 5-0 over two legs in the semi-final, but Dnipro showed what they are capable of with a surprise 2-1 win over Napoli.

“Of course there is great excitement for the club. This is the final and the fans expect a good performance from us,” he told a pre-match press conference.

“I’d be lying if I said the players weren’t nervous. But it’s important they forget those nerves tomorrow.”

Markevych says he has been surprised by Dnipro’s success in the competition but says they are capable of one last big performance against the Spanish side.

“I did not imagine we’d get this far, but your appetite grows once you start eating,” he said.

“I think Sevilla are fairly similar to Napoli in style, which will help us a lot. They can create a number of chances but our defence has been playing at a high standard and we must subdue them.

“We cannot hide from the fact Sevilla are the favourites so we need to make the most of the situation and play tactically.”