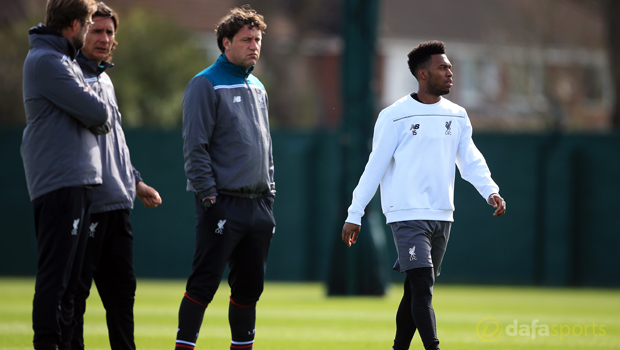 Liverpool forward Daniel Sturridge says he is relishing the prospect of taking on Borussia Dortmund’s Mats Hummels on Thursday night.

The pair are due to meet at Anfield in the second leg of their Europa League quarter-final clash having drawn 1-1 on an emotional night in Germany last week, as Reds boss Jurgen Klopp made his first return to his former club.

Sturridge was left out of his team’s starting side for that game, with Klopp instead preferring the more energetic Divock Origi but the England international could get the nod on home soil if the German boss opts for more experience.

Dortmund captain Hummels is regarded as one of the finest central defenders in the world and, having won the Bundesliga, the DFB-Pokal and the World Cup, has the trophies to justify his hype.

However, when fit, Sturridge, who is 2.50 to score anytime, has shown himself to be a classy striker and seems to relish the chance to prove himself against the best.

The 26-year-old says he is not intimidated about the task of facing Hummels and insists he is looking forward to the challenge.

“I’m at his level, so I don’t look at him as anyone who’s bigger than me or better than me or I’m in awe,” Sturridge told the club’s official website. “Not at all. He’s the same as me.

“We face players at the top level in the Premier League – it’s the best league in the world.

“We face defenders who don’t probably get as much credit as they deserve. I’ve been playing at the top level for a long time now so it’s nothing new.”