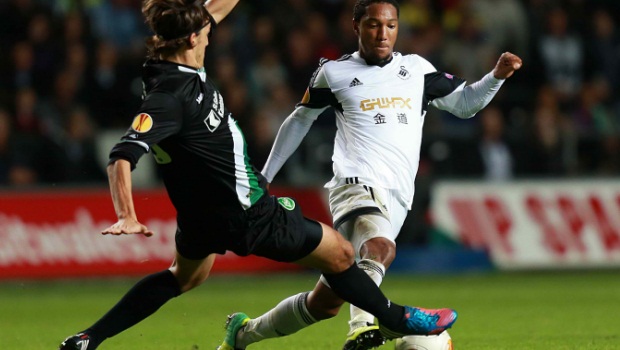 Michael Laudrup says Swansea are in a “fanastic position” in Group A of Europa League after they edged out St Gallen 1-0 at the Liberty Stadium.

Laudrup predicted a tough encounter against the Swiss outfit and that is exactly how it turned out with Wayne Routledge getting the only goal of the game to seal the three points.

The Swans failed to match the performance that saw them hammer Valencia 3-0 in the first group game, but Laudrup was happy enough to win ugly and is even happier with their position in the group.

Swansea top Group A on six points with Valencia and St Gallen just behind on three points.

Those two play each other next and Laudrup is aware that three points against Kuban, who have yet to pick up a point, in Swansea’s next game, will put them in an even stronger position.

“We are in a fantastic position, Valencia won away in Russia so we have six points, and there are two teams on three points and they play each other next time,” Laudrup revealed.

“If we could win the next game it would be a really good position.”

Laudrup was happy with the win and says he was pleased to see his side are capable of picking up a victory when they are not at their best.

“I am pleased with the win,” said Laudrup. “It was probably not one of our best games but in Europe games are tight and it is always difficult.

“The most positive thing is I don’t remember the last time we managed to win when not playing well. Normally we have to play well to win, but tonight we didn’t, although we had good moments.”