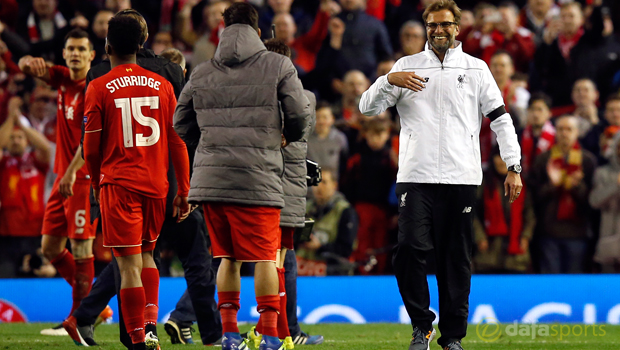 Liverpool manager Jurgen Klopp has revealed his side drew on the club’s previous European comebacks to inspire them to a dramatic 5-4 aggregate success against Borussia Dortmund in the Europa League on Thursday.

The Reds headed into the second leg of the quarter-final tie level at 1-1 on aggregate, but they soon found themselves 2-0 down inside the opening nine minutes of the return match at Anfield.

Divock Origi pulled a goal back for Klopp’s men after the interval, but the deficit was extended once again when Marco Reus made it 3-1 to the visitors on the night and 4-2 on aggregate after 57 minutes.

That appeared to be enough for the German side to secure their place in the semi-finals, but late goals from Philippe Coutinho and Mamadou Sakho and an injury-time winner from Dejan Lovren helped Liverpool secure a memorable comeback.

After the match Klopp revealed his side had drawn on the inspiration of the club’s previous European comebacks to help them secure victory, in-particular the Champions League success of 2005, when they came from three goals down to defeat AC Milan in the final in Istanbul.

He told reporters: “At half-time, there was a good atmosphere because I was satisfied, not with the goals, but the game in general.”

He said: “I told the lads, ‘I was not there, but a few older Liverpool players – most of them now experts on television – were 3-0 down at half-time and won a Champions League final. So, even though it is not likely, it is possible. We should try it’. And they did.”

Liverpool will be joined in the semi-finals of Europe’s secondary competition by defending champions Sevilla, Shakhtar Donetsk and Villarreal, and they are available at 2.75 to claim their first European title in 11 years.