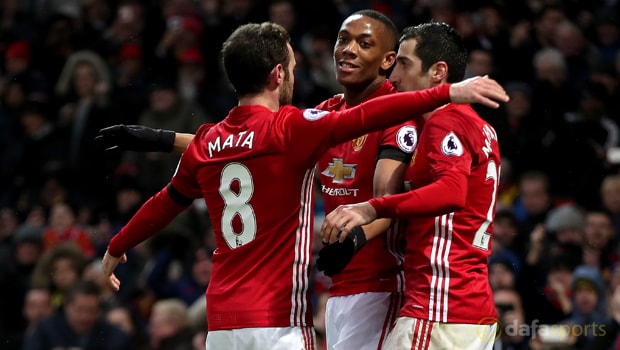 Anthony Martial is looking to get one over on some old foes when Manchester United take on Saint Etienne.

The pair have been drawn to face each other in the last 32 of the Europa League and meet for the first time at Old Trafford on Thursday.

Much of the talk in the build-up has been about the sibling rivalry between United midfielder Paul Pogba and his brother Florentin, but Martial also has some past history with Les Verts.

The 21-year-old came through the ranks at Lyon, a team who have traditionally been Saint Etienne’s biggest rivals due to their geographical proximity.

Martial, who is 2.40 to score at anytime, has endured a mixed second season to date at Old Trafford although he impressed in Saturday’s 2-0 win over Watford and will now be pushing for a start.

The France international admits he has extra motivation to perform against Christophe Galtier’s men and is determined to make his mark if given the chance.

He told the club’s official website: “There was a huge rivalry while I was still at Lyon – it was always a highly-charged atmosphere and they were usually massive games, the kind all players love to play in.

“So there will be that added competitive edge whenever I play against them. We know it will be a difficult match but if we play with all our quality, I think we can do good things.

“Of course, it would be great if I could score against them again but I hope we can win the game because that’s the most important thing, then it would be a bonus if I managed to grab a goal.”