Xhaka and Shaqiri head up Swiss squad for the Euros 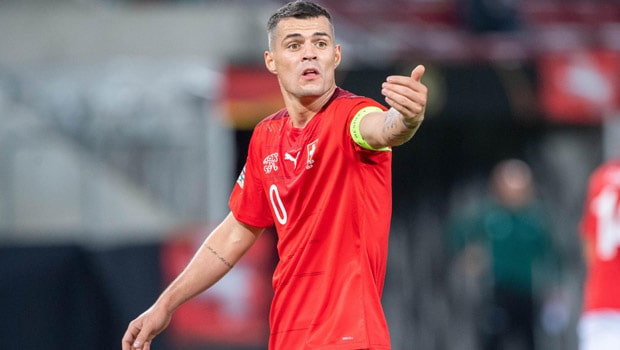 Former Arsenal captain Granit Xhaka and two-time Champions League winner Xherdan Shaqiri were notable inclusions in the final list of players for the Switzerland national team in the upcoming Euros.

Granit Xhaka and Xherdan Shaqiri, both of whom started their career with Swiss side FC Basel, are currently plying their trade in the Premier League. While both of them didn’t have the best of domestic campaigns with their respective clubs, it comes to no one’s surprise that they were nailed on in the Switzerland squad.

Granit Xhaka, the Switzerland captain, has played almost 100 times for his country. On the other hand, Xherdan Shaqiri has scored 23 goals in his 90 appearances and is the leading scorer for his nation among active players. Moreover, he has already represented the “A-Team” in as many as three World Cups.

Switzerland, who are ranked 13 at the moment, have not been in the limelight recently as their star players haven’t been performing very well. One player who has been making a name for himself if Benfica striker Haris Seferovic. He scored 22 goals and recorded 7 assists in the league alone. A lot will depend on his goal scoring prowess if Switzerland are to pull off a dream run this summer.

Swiss are placed in Group A which includes the likes of Italy, Turkey and Wales. While Italy will be the favourites to progress, this group can be very tricky. Turkey have been really solid at the back recently and if Gareth Bale is in the mood, Wales can prove to be a hard opposition to beat.

Switzerland kick off their tournament against Wales in Baku on June 12 before taking on Italy four days later and rounding off pool play against Turkey on June 20.