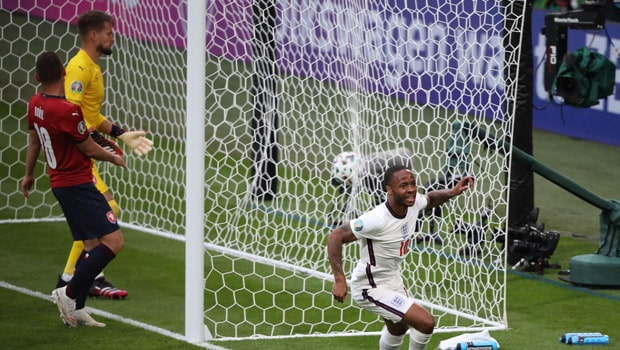 Raheem Sterling scored his second and England’s second goal in three UEFA Euros 2020 group stage games as the Three Lions finished top of Group D with a 1-0 win over the Czech Republic at the Wembley Stadium on Tuesday evening.

It was Gareth Southgate side’s second win of the competition after beating Croatia 1-0 in the first game and the 0-0 draw against Scotland in their second group game.

The Three Lions started the game on the front foot as they aimed to win the group with Manchester City forward Raheem Sterling, arguably England’s most informed player at the Euros, hitting the woodwork with a long over the Czech Republic goalkeeper.

However, twelve minutes into the game, Arsenal’s Bukayo Saka wriggled his way around the Czech Republic box before passing to Aston Villa midfielder Jack Grealish who then fed Raheem Sterling with his second goal of the competition.

Tottenham striker Harry Kane was the center of discussion with his lack of goals at the tournament and he indeed tested Czech Republic goalkeeper Tomas Vaclik in the first half but nothing more was seen from the striker.

At the end of the game, Arsenal Bukayo Saka was named star of the match after shinning while England will now face a bigger test in the round of 16 as they await any of the four teams in group F that houses Germany, world Champions France and European and defending Champions Portugal.

Meanwhile, Croatia secured their place in the next round with a 3-1 victory over Scotland at Hampden Park to knock out the Scots.

Nikola Vlasic had opened the scoring in the first 15 minutes before Callum McGregor equalized on the stroke of half-time.

Luka Modric then scored a spectacular goal early in the second half before Ivan Perisic rounded up the scoring with a header.