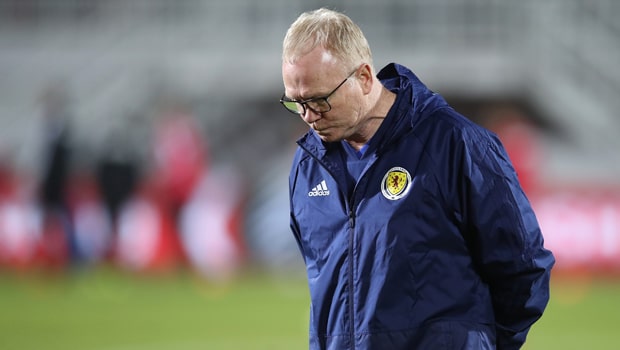 Scotland are in search of a new manager after parting ways with Alex McLeish on Thursday.

Former Aberdeen star McLeish only took over as Scotland manager for the second time in February last year and he enjoyed some success, winning five of his 12 games in charge, while he also helped the Tartan Army top their UEFA Nations League group.

However, the 60-year-old never seemed to fully win over the Scotland supporters, and, following a poor start to their Euro 2020 qualifying campaign that saw them lose 3-0 in Kazakhstan, the Scottish Football Association has opted to go in a new direction.

“The decision to part company was not an easy one, especially given Alex’s status as a Scotland Hall of Fame member, earning 77 international caps, having played in three World Cups and taken charge of the national team for two spells,” SFA chief executive Ian Maxwell said.

“It was only taken after full consideration by the Board and after an honest and respectful conversation between myself and Alex earlier in the week.”

The search for McLeish’s successor now begins in earnest although two potential candidates have seemingly already ruled themselves out of the running with Derek McInnes and Jack Ross preferring to keep their focus on their current jobs with Aberdeen ans Sunderland.

The likes of Steve Clarke, David Moyes and the man McLeish succeeded at the helm, Gordon Strachan, have also been linked, with the next international break not coming until early June when Scotland face Cyprus and Belgium in Euro 2020 qualifying.

Scotland have not qualified for a major international tournament since the 1998 World Cup and they are priced at 501.00 to go on and win the Euros next summer.