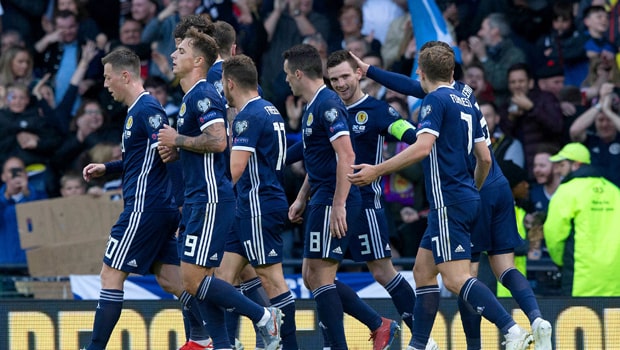 Skipper Andy Robertson says Eden Hazard is the best player he has faced in the Premier League but he warns Scotland cannot fear him in Tuesday’s clash with Belgium.

Steve Clarke’s tenure as Tartan Army boss got off to a shaky start with a 2-1 win against Cyprus at Hampden Park on Saturday.

Robertson scored a thunderous opening goal but, having conceded a sloppy leveller, Scotland fell over the line when sub Oliver Burke scored from close range in the dying embers.

Roberto Martinez’s World Cup semi-finalists from last summer will present the ultimate Group I test on Tuesday evening and Robertson says Real Madrid-bound Hazard is the ribbon in the Belgian bow.

“He’s probably the best player I’ve come up against in the Premier League and he deserves his move and all the plaudits he gets,” Robertson said.

“He’s probably one of the best in the world at the minute. “But it all comes back to showing him respect because of his ability but not showing him too much respect that we fear him.

“We need to try and defend him out the game but we know tough that’ll be.” A 2-2 draw with England at Hampden Park in the summer of 2017 is the last time Scotland have come out of a clash against a big nation with a positive result, admits Robertson.

The Liverpool Champions League winner says they must strive to end that run. “We’ve not had a big result since probably England and there was still some disappointment because of the late goal,” he added.

“Since then, the big nations have turned us over if we’re being honest. We need to try and make ourselves hard to beat against the top nations again.”