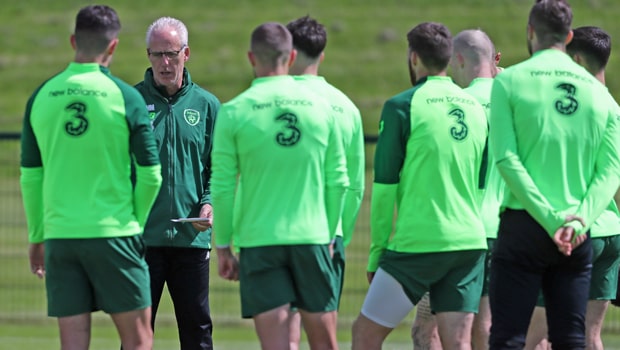 Republic of Ireland manager Mick McCarthy is hoping his team can beat Gibraltar comfortably in their Euro 2020 qualifier – but will accept three points in any form.

McCarthy’s first game in his second spell in charge of Ireland was a scrappy 1-0 victory over the new European minnows, as Jeff Hendrick’s goal early in the second half gave them a deserved but uncomfortable win.

A win against Georgia followed by the same scoreline before yet another clash with Denmark on Friday evening saw Ireland grab a late point as Shane Duffy cancelled out a goal from fellow Premier League star Pierre Emile Hojbjerg.

That result put them top of group D in the qualification process, though both Switzerland and Denmark have played one fewer game. With Switzerland having played in the Nations League, McCarthy’s men could potentially go six points clear at the top if results go their way.

In typically defiant form, McCarthy said although he would like to see his team win comfortably and play football, he does not ultimately care how the result comes.

“If it ends in a scrappy 1-0 win, off somebody’s backside, I’m not bothered because I’ll take the win,” he told reporters.

“It would cause me stress if it’s only 1-0 in the last minute but so long as we win. That’s me being professional, since when I have been romantic about it?

“I’d like a lot better performance than in Gibraltar. It would be lovely walking off with a good result, everyone happy and the squad has a few goals.

“But we’re playing a team who are coming here desperate to stop us doing that and we have to try and break them down.” Ireland are heavy favourites for the game at 1.02 and can be backed to win 4-0 at 5.25.