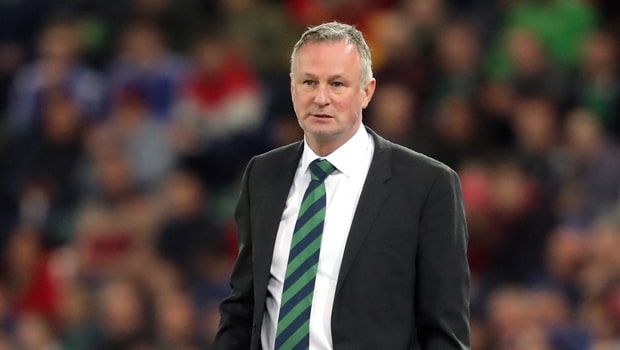 The heavyweight tasks lie ahead for Northern Ireland but manager Michael O’Neill feels victory in Belarus on Tuesday can help put some pressure on the Netherlands.

O’Neill’s side have started Group C with three wins from three games, coming from behind to win 2-1 against Estonia in Tallinn on Saturday.

They bid to make it four from four against Belarus on Tuesday evening to go into the summer break on a high. His side have been lumped into an unforgiving section that includes Ronald Koeman’s Dutch side and Germany, with just two spots up for grabs in the race to Euro 2020.

Northern Ireland can forge nine points clear of Koeman’s side with a win in Belarus, knowing that the Netherlands next game is away in Germany in September. That, says O’Neill, gives his plucky side a chance to test the mental resolve of Holland.

“The most important thing for us was to try and not drop points in any of these four games because obviously we have to assume the Netherlands and Germany won’t drop points,” O’Neill said.

“But the nice thing for us is we can put pressure on, in particular, the Netherlands because they have games to play and make up.”

He has warned his players that Belarus won’t be any kind of pushover but O’Neill feels they are in a positive place after Saturday’s late turnaround.

“As Estonia showed the other night, Belarus will look at this game as one they potentially could win,” he added.

“With that in mind, it’ll be an extremely difficult game. They have talented players in their squad, they have players in season as well.

“We come into the game mentally in a good place because we won the last game, our mental tiredness is not the same, so that should be the key factor for us.” Northern Ireland are 2.63 to win on Tuesday evening, with Belarus 3.10 and the draw 3.00.