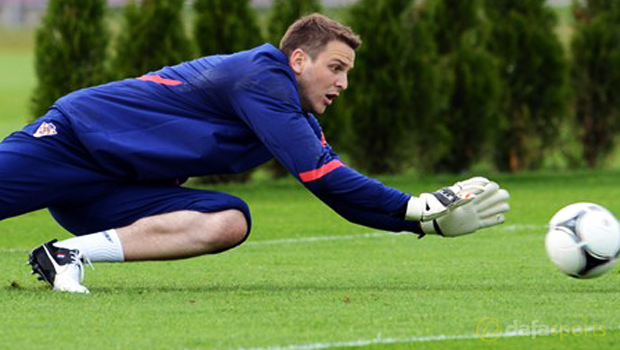 Croatia goalkeeper Ivan Kelava believes the national team has a great chance of making a serious challenge for Euro 2016 in France this summer.

Ante Cacic’s men secured their spot at the major tournament by finishing second in their qualifying group, winning six, drawing three and losing just the one game.

The Croatians were the top scorers in their group with 20 and also boasted the best defensive record with just five goals conceded, although they could not manage to clinch top spot from unbeaten Italy.

Croatia failed to progress into the knock-out stages at Euro 2012 after some poor performances but they will be hoping for a much better run based on the plethora of talent in their squad.

Cacic has a nice mix of youth and experience in his squad at the moment with the likes of Juventus star Mario Mandzukic, Hamburg’s Ivica Olic, Barcelona’s Ivan Rakitic and Real Madrid’s Luka Modric all involved.

Kelava, who is yet to earn a cap for the senior side, is expected to make the squad as a back-up keeper and the 28-year-old, who plays his club football for Granada, believes Croatia have a great shot at glory.

“I think we can do well,” he told Goal in an exclusive interview. “Now we have a great team with [Luka] Modric, [Ivan] Rakitic and [Mateo] Kovacic on midfield. We also have a great goalkeeper that plays at Monaco [Subasic] and a very good team. I think we can go very far.”

Croatia, who are priced at 26.00 for the tournament, have been drawn against defending champions Spain, Czech Republic and Turkey and they are priced at 1.36 to top their group.